The globe valve is different from the ball valve, it is a valve used to adjust the flow in the pipeline, consisting of a movable plug or disc element and a stationary ring seat in a generally spherical body.

Globe valves are named for their spherical body shape with the two halves of the body being separated by an internal baffle. 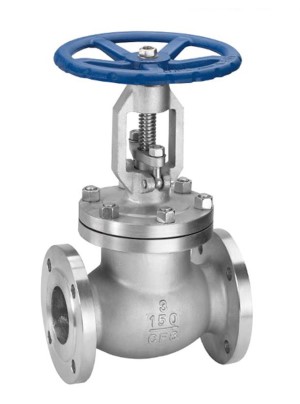 Once the valve disc of the shut-off valve is removed from the closed position, there is no more contact between its valve seat and the sealing surface of the valve disc, so its sealing surface has very little mechanical wear, so its sealing performance is very good. The disadvantage is particles in the flowing medium may be trapped between the sealing surfaces. However, if the valve disc is made of a steel ball or a ceramic ball, this problem will be solved. Since most of the valve seats and discs of globe valves are easier to repair or replace, and there is no need to disassemble the entire valve from the pipeline when repairing or replacing the sealing element, this is very suitable when the valve and the pipeline are welded together.

Since the flow direction of the medium through this type of valve changes, the minimum flow resistance of the globe valve is also higher than that of most other types of valves. However, this situation can be improved according to the structure of the valve body and the layout of the valve stem relative to the inlet and outlet channels. Simultaneously. Since the stroke between the opening and closing of the shut-off valve is small, and the sealing surface can withstand multiple opening and closing, it is very suitable for occasions that require frequent switching.

The globe valve can be used in most media flow systems, especially used for corrosive or high viscous fluids which solidify at room temperature. Various types of globe valves have been developed to meet various applications in petrochemical, electric power, metallurgy, urban construction, chemical and other sectors.

The use of globe valves is extremely common, but due to the large opening and closing torque and the long structure length, the nominal diameter is usually limited to 250mm or less, and some are up to 400mm. However, special attention should be paid to the inlet and outlet directions when selecting. Generally, the globe valve medium below 150mm mostly flows in it from the below of the valve disc , while the globe valve medium above 200mm mostly flows in from above the valve disc. This is due to consideration of the closing torque of the valve. In order to reduce the opening or closing torque, the stop valve above 200mm is generally equipped with internal bypass or external bypass valve.

The globe valve has the following advantages:

The disadvantages of the globe valve are as follows: